Posted by Lindie Naughton at 6:07 pm No comments:

Thank you to everyone for nice comments on the repeat showing of Donal Byrne's film on the  Limerick aviation pioneer Mary Heath shown on RTE's  Nationwide last night.

Thanks to all the publicity this year, the first printing of  "Lady Icarus" is now sold out at this end, although I believe some copies are surfacing on the dreaded Am*zon.

If any publisher out there is willing, I'd  be very happy to produce a second edition!

Copies of both "Markievicz - and Outrageous Rebel" and "Markievicz - Letters and Rebel Writings published by Merrion Press are still available. As indeed are copies of "How to Mow the Lawn" and "Faster, Higher, Stronger - A History of Irish Olympians".
Posted by Lindie Naughton at 9:43 am No comments:

The Aviatrix - repeat on BBC

See that The Aviatrix: The Lady Who Flew Africa was shown again last night on BBC4. It may even be on the iPlayer.
"Lady Icarus - a life of Irish Aviatrix Lady Mary Heath" is out of print, but I do have a few copies left. If you want a copy, you can an order via PayPal; the link is on this blog  Or contact me at lindie (dot)  naughton at gmail dot com.

Posted by Lindie Naughton at 10:30 pm No comments:

"Thrills I Have Had in the Air" by Lady S. Mary Heath

Just came across this booklet (or magazine?) when on an internet search, It's not listed for any library. Another Mary Heath mystery to be solved. 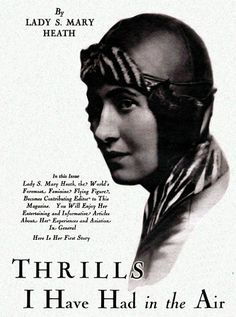 Posted by Lindie Naughton at 3:19 pm No comments:

Mary Heath and her medals

Our old pal Michael Traynor has unearthed this image of Mary Heath with her large collection of medals and trophies won at a bewildering number of athletics and aviation meet in all corners of Ireland and Britain. 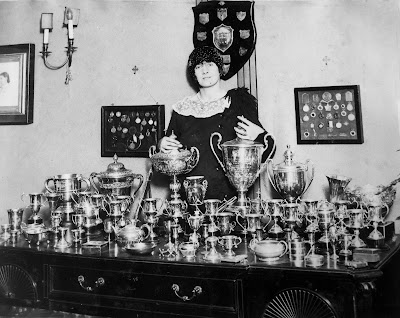 A similar image in Noel Henry's book "From Sophie to Sonia - a History of Women's Athletics" sparked my interest in this remarkable Irishwoman. Some of the trophies were found in a garage in London after the death of  GAR Williams, who was married to Mary Heath in the 1930s and died around 1990.
I was contacted about these trophies by George Haley around 2004, when an exhibition on pioneering women aviators took place at the Zeppelin Museum in Friedrichshafen, Germany. George and his wife Brigitte Hoffman had lived in the Williams house for a time and found the trophies. They were displayed at the exhibition, which I also visited.
Wonder where they are now? If you have any idea, please get in touch.

Posted by Lindie Naughton at 10:56 am No comments: 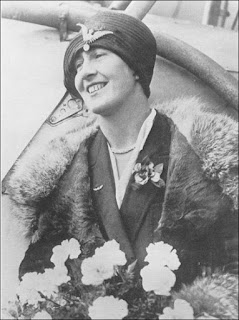 It's part of a festival called "Still, We Work" brought to Limerick by the National Women's Council as part of its 40th anniversary celebrations.
The festival, from October 12-18, includes an exhibition of  specially commissioned artworks by Sarah Browne, Vagabond Reviews, Miriam O’Connor and Anne Tallentire. The artists were asked to produce works reflecting on women’s work today.
Posted by Lindie Naughton at 12:42 pm No comments:

Over the past few years, I would get an occasional call from Tom Harrington who lived in the Clashmealcon area of north Co Kerry. He would tell me I hadn't been entirely fair to Mary Heath's mother Kate Theresa Doolin in the “Lady Icarus” book; I should come down and he'd give me a tour of the area she came from.
When Tom called a few weeks back, I'd just got an invitation to a civic reception in the University of Limerick to honour three famous Limerick women – Kate O'Brien, Charlotte Grace O'Brien (no relation) and Sophie Peirce, later known as Lady Mary Heath.
Forgetting that Tralee is quite a distance from Limerick city, I told Tom that I'd be down his way and that maybe we could meet up before I went to the reception. “We'll be waiting for you from the break of dawn!” he said giving me instructions to rendezvous at Smith's pub - illustrated with greyhounds - at Lissleton.
Kate Theresa Doolin, mother of Sophie Peirce, was a tall, good looking brown-haired woman, born in Causeway, near Tralee. According to Tom, she was working in Ballybunion when she met Jackie Peirce, an attractive man, but wild and erratic. Jackie had inherited a farm at Knockaderry, just north of Newcastle West, from his uncle Tom Evans and was looking for a housekeeper. Kate took the job and later, she married him in Dublin. It proved to be a tumultuous relationship.
Sophie was born on 10 November 1896 and christened Sophia Catherine Theresa Mary Peirce-Evans. A year later, she was sitting on the floor of the kitchen in Knockaderry House when neighbours burst in. They had been woken up by by a wild-eyed Jackie, who claimed to have murdered his wife earlier that evening. Beside the baby Sophie was the battered body of her mother. At his trial Jackie was found guilty but insane.
Whether any member of her family attended Kate Theresa Doolin's funeral is unknown. They came from a modest farm, accessible by a winding mud track off the road from Lisselton; my guides were Tom, and local woman Martina Flynn. The family was respected, although several members were known to have a weakness for “the drink”.
The area, whipped by a bracing wind coming off the Atlantic, is relatively flat and the soil not great. Scratching a living here can't have been easy. Originally, the house was thatched; today it's kept intact by a corrugated tin roof. Later a larger house was built beside the original cottage and across the compact yard is a cow shed. All are abandoned. “No, there's none of them left – the last person who lived in the original house died when it went on fire,” Tom says.
Next stop is "Kate Lacey's haggard",  as it's known locally; not far away and closer to the magnificent
Ballyheige Bay – a magnificent location flanked by Kerry Head to the north and the Magheree Islands and Rough Point to the south. Kate Lacey, mother to Kate Theresa  Doolin and grandmother of Sophie, was physically handicapped and had very short little hands and feet. Her daughter, Kate Theresa, was the child of a Dr O'Mahoney. Kate's own background was somewhat problematic, but she was still highly respected locally. Today, nothing remains of her cottage, which occupied a corner of the field.

We travel on to Tom's mobile home, snugly tucked between sand-dunes, which offers some protection from the wind whipping in from the Atlantic. I had been promised a local speciality called sluacán – a wondrous sea vegetable collected off the rocks at low tide and boiled for several hours.
Eaten regularly, it protects from all manner of ills – and is often accompanied by a drop of the hard stuff (in this case made from barley and spring water).

Now it's Martina's turn to act as guide. She's bringing me to Ballybunion where Sophie's aunt Cis lived for many years and where local remembered her flying in for visits. One of them is 94-year-old Mick Finucane from Urlee, Lisselton. Mick played football for Kerry at junior and senior level for ten years and is the last remaining member of the famed team that lost to Cavan in 1947 when the All Ireland football final was played in the Polo Grounds, New York.
“Emigrants in those days didn't get to come home and so they decided to bring the All Ireland to them,” remembers Mick.
That was just one of many adventures in a long and useful life for Finucane. After the death of his first wife, with whom he raised eight children, he remarried. His attributes his youth to his 19-year old daughter, now a student in Waterford.
He remembers clearly the day when Mary Heath landed her small plane in Rhatigan's field just outside the town – about the only flat piece of land locally, with not too many trees to cause trouble. We meet him opposite the field (that has Rhatray's marked on the gate) with his old friend Bosco McMahon who can confirm local folk memories of the famous Lady Mary Heath still current.
“I was collecting the cows from the field when I heard the plane coming over the hill. It came over the hedge and I ran back to the house to tell my people. In an hour, after it landed, there were a thousand people gathered in the field.”
“They came from everyone in horses and carts, by foot and on bicycles,” chips in Bosco.
Aeroplanes were a highly unusual sight in those days and the young Mick Finucane was fascinated. “I remember when she said 'contact' and put two wires together, a man called Jack rotated the propeller for her. It was the first plane I had ever seen and they flew very low in those days – 40 feet off the ground no more."
She was good at “the sales talk” he remembers. “When someone went up for a joyride and then came back, they'd be getting out of the plane a bit shaken after the trip. She'd say 'Did you see the dolphins?' and then more would want to go up. They would get in the plane and fly off to the Atlantic. People on the ground would be calling 'come back come back!' as if they were going away forever.”
So did he take a joyride himself? “No – we didn't have much money – and anyway I didn't have the nerve.”
On one of her regular visits to Ballybunion, then a popular seaside town, the young Sophie Peirce almost drowned. Despite the warnings of her aunt Cis, she insisted on swimming into one of the local caves and got caught when the tide turned. After an hour or so battling the currents, she found her way out, to the relief of her aunt, who had given her up for dead.
It gave Sophie a life-long respect for the power of the ocean and, many years later, after her trip across Africa, she flew the Mediterranean from Tunisia to Italy only after wrapping herself in blown-up motorcycle tyres. These she hoped would act as life belts if her tiny Avro Avian plunged into the sea. As it happens, the “lifebelts” burst as soon as she flew high; fortunately, she soon saw the distinctive shape of Mount Etna looming ahead and landed safely.
Bosco McMahon confirms that the “Grand Cave” on the steep vertical cliffs beside the “Ladies' Strand” can still trap the unsuspecting. “People go in at low tide and then they get caught and there's no way out.” Ballybunion Sea and Cliff Rescue Service is kept busy, especially in the summer months.
Finally- after promising Mick to attend his funeral if we don't meet up again -  comes a visit and a cup of tea with John Pierce in Listowel. He's not related to Sophie Peirce – Pierce in a number of variations is a common name in the region. John is presented with a saucepan of “slucan” from Tom Harrington via Martina and gives me a photocopy of a letter written to a local paper by his uncle about Lady Heath (more of which anon).
It's the end of my whirlwind trip around north Kerry. Time to head back to Limerick, where a group of five men, all proudly wearing their chains of office, are assembled to honour their trio of celebrated local women. The irony is lost on them.
*Thanks to Tom Harrington for his impeccable organisation of an unforgettable trip and to Martina, his able assistant. Ireland and the Irish at its best!
Posted by Lindie Naughton at 5:00 pm No comments: